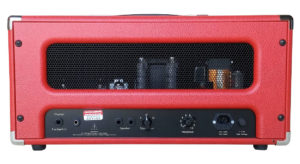 The Clean Channel (White) is inspired by the British Invasion of the early 60’s with its bright and chimey sweet tones.
This channel has inherited its tonality from it’s little brother, The Bunker Hill. It’s simple layout consists of a Volume and Tone Control.  This tone control has one of (if not the) widest usable sweep in the Industry! A variety of tones are super easy to dial in with a simple twist of the dial.

The Overdrive Channel (Red) pays homage to the much sought after EL34 designs of the late Ken Fischer.
This channel features Bass, Middle, Treble, Volume and Gain Controls. Reminiscent of Ken Fisher’s designs, the Red Channel is extremely responsive to the players touch. Roll back your guitars volume, lighten your pick attack and you’ll find a world of great punchy clean to medium gain tones. Running your guitars volume harder will push the amp into higher gain territory, yet the amp will retain it’s punch, clarity and definition.

The back of the amp includes a Presence Control that effects both channels, as well as a external footswitch jack allowing the player to switch between the two channels.

With a spectrum of tonal choices and colors that can be dialed in between it’s two independent channels and the players dynamics, The ValveTrain Yorktown makes it easy to achieve tonal bliss with it’s combination of clean, mean and everything in-between!

These Artists Play the Yorktown