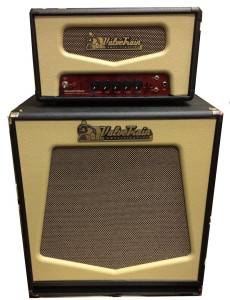 The Brandywine Bass amp marries vintage tone and design with modern features and construction methods.
Inspired by the bass amplifiers of the early 1960’s that set the benchmark for recorded bass tone the Brandywine remains true to it’s roots.

In order to control today’s active basses there is a variable pad that switches from passive to active mode. The variable feature allows today’s bassist to dial in the sweet spot for 9 and 18 volt systems.

The Tone stack in the Brandywine is a Baxandall active stack that has the traditional Bass and Treble controls with the addition of a Middle control. Leaving the Middle control on 1, the tone is reminiscent of the early days of the flip-top amps produced in Linden, NJ.
The Ultra High (Bright) and Ultra Low (Deep) switches allow further control over Brandy’s voice.

The Governor control limits the output volume of the amplifier. When set to 1 there is no volume reduction. As the control is moved towards 10 the output level is reduced. The volume control can be used with the Governor to create preamp overdrive.
The Governor originally appeared on the Sundown Amplifiers by Dennis Kager that were produced in the 1980’s.


These Artists play the Brandywine