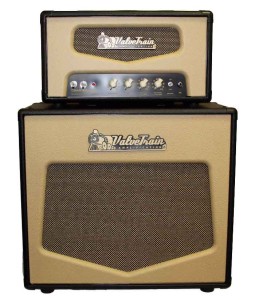 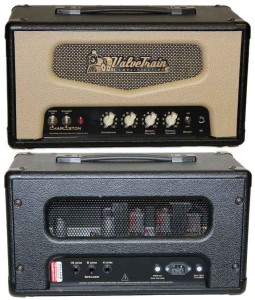 The Charleston (which replaced the ValveTrain 416) is an amp that is rich with vintage tone and has an expanded set of controls that will allow today’s guitarist access to a tonal palette that was not available with the original amplifiers.

The Charleston inherits its’ tonal roots from the venerable Fender 5E3 Tweed Deluxe from the late 1950’s. The most interesting feature of the Charleston is the design of the initial gain stages.

There are 2 volume controls, one for the Normal channel and one for the Bright channel. The two channels are internally isolated and “jumpered”. This means that the player is able to blend the tonality of each channel into the overall mix. Because the channels are both active, the preamp tube is running in parallel operation producing more gain than is normally found in an amp of this style. Turning either volume control down, which eliminates that channel, returns the tone of the amp back to the single voice operation of the original. There is a boost switch that activates a gain and frequency boost on both channels.

By controlling the overall boost and the volume of each channel, the blending of the two distinct voices opens up the tonal spectrum of this amp.

The Governor limits the overall volume of the amplifier sent to the power amp stage.

These artists play the ValveTrain Charleston